Proposed as an expressway connecting Interstate 95 to Lower Moreland Township in Montgomery County in 1954, Woodhaven Road was meant to be more than a spur into northern Philadelphia County.  Construction began on the expressway in 1962, with the first section to open from Interstate 95 to US 13 with a stub section ending at Poquessing Creek in 1963.  In 1965, construction began from that point to the end of the expressway at US 1 and was completed in 1967 with the "Pennsylvania-standard" end of an expressway:  a stub portion with plans to extend.  PennDOT continued to study extending the expressway, and went as far as demolishing 28 homes in the 1970s in the Somerton neighborhood.  However, with the financial problems PennDOT faced in the late 1970s, and with opposition from homeowners in Lower Moreland Township to the idea of more traffic in their area, the plan to extend the expressway was shelved. 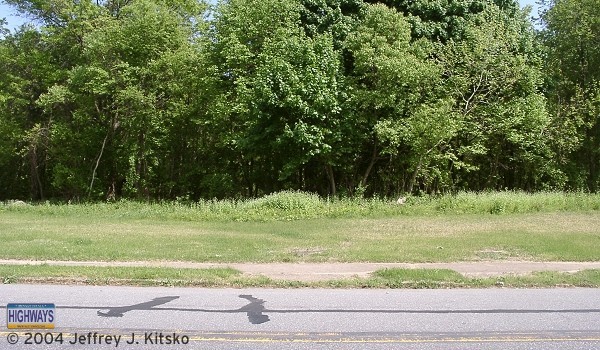 Empty lots are all that remain on Sewell Road from the 1970s when Woodhaven Road
was planned to be extended and then shelved.  PennDOT crews still mow the lots
because the Commonwealth technically owns the land.

With improved financial standing, the Department of Transportation revived the extension plan.  However, the Federal Highway Administration stated that a new environmental impact statement be filed due to development in the area and tighter environmental and community mitigation regulations.   In 1988, PennDOT announced that it would extend the expressway to Bustleton Avenue.  The extension would have opened in 1992, but opposition from the Westwood subdivision halted the construction.  Officials in Lower Moreland Township chimed in again with their disapproval of the plan, which would dump traffic onto Byberry Road and Philmont Avenue. 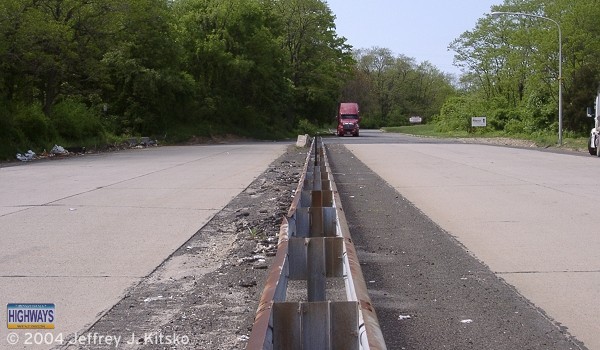 Looking towards the end of the expressway.  The street on the right where the truck is
parked is access to a business.

After years of congestion, PennDOT decided that something needed to be done at the western end of the expressway.  The study began in 1993, and since that time, 13 improvement alternatives to relieve congestion in that part of Northeast Philadelphia and eastern Montgomery County have been proposed.  Alternatives were assessed for feasibility and effectiveness in satisfying the following transportation needs:  improve traffic flow through the area, reduce congestion and delays on Byberry Road, improve conditions which affect traffic safety, and provide a structurally sound bridge over the SEPTA Regional Rail line.  The alternatives that did not meet the needs were dismissed from further study.  Further evaluation of the alternatives took place to eliminate those with excessive impacts to the environment and the community.  Four alternatives were being evaluated for the project, with the fourth being an extension of the expressway.  However, that one was taken off the planning files, and now only the following three are left: 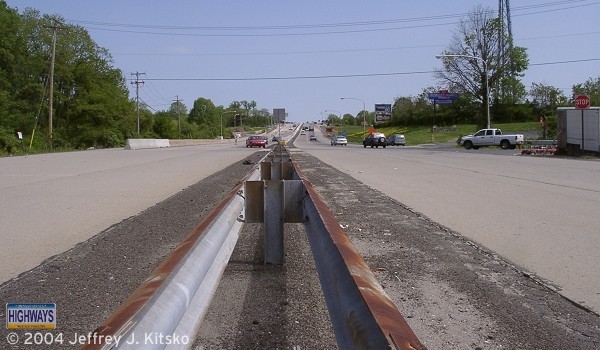 Looking towards the active expressway and the US 1 cloverleaf.  The inactive onramp
from US 1 southbound is located behind the Jersey barrier on the left.

On August 29, 2002, PennDOT announced a smaller construction project that would take place in the corridor.  A $10 million rehabilitation project began on September 9 on the section of Woodhaven Road between US 13 and Evans Street.  The project will entail reconstructing the shoulders and median, rehabilitating the deteriorating concrete pavement, upgrading streetlights and resurfacing, and repairing and resurfacing five bridges along the corridor.  Construction concluded in May 2004.

Funding for whatever may come might be a torn in the side of PennDOT.  Releasing their revised 12-Year Transportation Program in 2004, PennDOT has shifted the extension into the reevaluate column due to changes in their budget.

People driving on the expressway on June 14, 2005 must have thought they hit the jackpot.  A Loomis Wells Fargo armored truck let its valuable load go after exiting I-95 due to a malfunctioning door.  Philadelphia Police and Pennsylvania State Police aided the guards in picking up the cash that had landed on the shoulder and an embankment.  The Interstate 95 exit had to be closed while the money was recovered.