One of the major commuter routes from Philadelphia to the northern suburbs, the Fort Washington Expressway has its beginnings in 1947.  It was in that year that the Philadelphia City Planning Commission drew up plans for an expressway from Montgomery County to Interstate 95.  Construction began in 1958 on a section from PA 152 at Easton Avenue to north of Spring House.  In 1959, the first section opened from PA 73 to just north of Spring House.  The remained of the route from interchange at Easton Road, originally built for the Ten-Mile Loop Expressway, to PA 73 opened in 1960 to become part of then US 309.  Like many expressways built at the same time, the Fort Washington Expressway suffers from short acceleration and deceleration lanes, a lack of shoulders, and a narrow median.

Even with construction appearing to be complete, the Planning Commission continued studies on extended the expressway into the central part of Philadelphia through to the mid-1970s.  The route would have wound through Wyncote and North Philadelphia before intersecting US 1/Roosevelt Expressway and then heading south at Sixth Street before ending at the cancelled Girard Avenue Expressway.  The Delaware Valley Regional Planning Commission estimated the extension to US 1 could be completed by 1975, and then to the Girard Avenue Expressway by 1985.  With construction costs rising and a tense political environment, the southern extension faced a difficult future.  On July 1, 1977, PennDOT cancelled spending on proposed highway projects, and in reaction to that news, the Philadelphia City Planning Commission deleted the expressway from future spending allocations.

The talk of building an expressway alignment from Ambler north to the Pennsylvania Turnpike-Northeast Extension at Lansdale resurfaced in 1983.  The 7.5-mile-long extension would have been built to connect northern Montgomery County to the Philadelphia area, and relieve congestion on parallel highways.  Interchanges would have been built at PA 63, North Wales Road, the proposed US 202 expressway, and Bethlehem Pike.  The plan has not been discussed since then.

In 1998, the Pennsylvania Department of Transportation announced a $160 million project to rehabilitate the entire Fort Washington Expressway.  The Department of Transportation is paying 20% of the cost, while the Federal Highway Administration is picking up the remaining 80%.  The $200 million project to improve the expressway between Cheltenham Avenue and PA 63/Welsh Road is comprised of five separate contracts each contract has or will move into construction between 2001 and 2003.  Two of the contracts will concentrate on construction of a reconfigured interchange at Fort Washington, which is also the same interchange for the Pennsylvania Turnpike.  The other three are for the rebuilding of the expressway, its bridges, overpass, and remaining interchange ramps and started in Fall 2001.  Two contracts that comprised Phase I began in Spring 2001 and 2002 that resulted in improvements to 31 intersections on key routes near the expressway.  In late 2002, work moved to the section from PA 152 to Highland Avenue.  The replacement of the interchange at PA 152 and Easton Road will be completed in early 2005.  In March 2004, reconstruction began from PA 73 to Highland Avenue, which is slated for completion if mid-2006 and cost $57.9 million.  Construction will begin in Spring 2005 from Cheltenham Avenue to PA 73 and in early 2006 from Highland Avenue to PA 63.  The improvements to the expressway will be reconstruction of 40 bridges and overpasses, lengthening of on and off ramps, adding new entrance and exit ramps, adding new 12-foot-wide right shoulders and four-foot-wide left shoulders, installation of a Jersey barrier in the median, placement of sound walls along four miles of the expressway, upgrading of the drainage, and installation of a Intelligent Traffic System that utilizes video cameras and variable message signs.  Project website:  http://www.309online.com/.  Project hotline:  215-358-3093.

During inspections of completed bridge decks in the project area in December 2011, hairline cracks were discovered.  It was determined that the cracks did not pose any issues to the structural integrity, and PennDOT sealed the affected decks to prevent water from infiltrating the concrete and lessening the lifespan of those bridges. 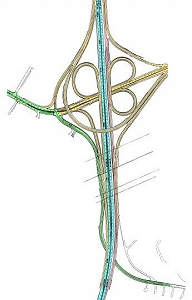 Planning map showing what the PA 309/PA Turnpike interchange will look like after construction is completed.  The pink line on the right is the collector/distributor lane for movements on and off the Fort Washington Expressway.  The green line on the left is the new segment of Pennsylvania Avenue which will be built to provide a continuous alignment once again.  Construction of the expressway severed Pennsylvania Avenue into two segments.  (PennDOT)